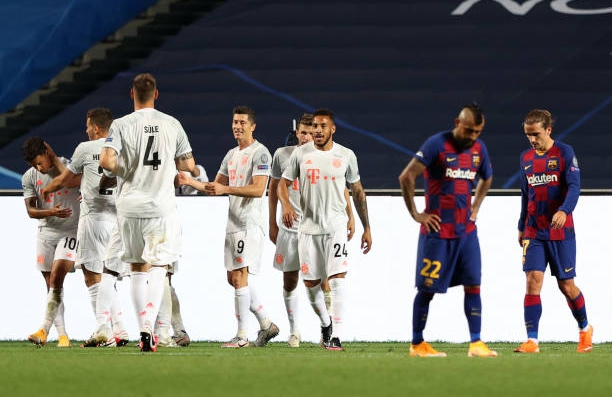 Bayern Munich totally embarrassed Barcelona in a 8-2 Champions League win on Friday night to book a spot in the semifinals of the tournament in Lisbon.

The match got off to a cracking start with Thomas Muller putting Bayern ahead early and David Alaba conceding an own goal to Barcelona minutes later to put the scoreline at 1-1 inside of the opening 10 minutes.

Bayern then went back in front just past the 20-minute mark when Ivan Perisic picked up a pass from Serge Gnabry and fired past Marc-Andre ter Stegen with a shot that took a slight deflection and wound up in the roof of the net.

It was 4-1 in Bayern’s favour soon after as a rapid-fire few minutes saw Muller set up Gnabry with a lovely first-time pass for a goal before notching his second of the match at the near post from a Joshua Kimmich assist.

According to ESPN, the German Champions took the three-goal lead into the dressing room, with Barcelona reeling after an opening 45 minutes that saw them concede four in the opening half of a UCL knockout-round game for the first time in club history.

After the match, Barca defender Gerard Pique said: “I’m in pain. We all are. We can’t compete like that. It’s very, very tough to take. Nothing more is worth saying. The club needs changes. Not just the players, I don’t want to point out anyone.

“But football is a sport where change is constantly required. We must change the dynamic we are on because I believe we have just hit bottom. We have to look around, we have to trust that people will do the right things for the club.”

Luis Suarez looked to have given Barca a lifeline in the second half with an early goal, but Bayern hit right back when Alphonso Davies tip-toed down the endline and cut a pass back to Kimmich for an easy first time finish to make it 5-2.

Bayern continued to pile on, this time through Robert Lewandowski, who headed home a cross from Barcelona loanee Philippe Coutinho.

Coutinho then scored a goal of his own minutes later and added a second before full-time to complete the Bundesliga champions’ 8-2 thrashing of Barcelona.

“It’s tough to explain,” said Muller after the match. “I think in this moment our team is in incredible shape.

“Thanks for the man of match trophy — maybe we have 12 to 15 players who deserve it. We worked so hard and have this intensity. It’s tough to beat us. It was so much fun today.

“For our style of players it doesn’t matter about the names of players we are facing. When someone presses and dribbles, it’s not a problem. Then we catch the ball and have so much talent in the offensive line.”

Hansi Flick’s side, who are 9-0 in the Champions League this season, now await the winner of Saturday’s match between Manchester City and Lyon to see who they’ll face in the semifinals on Wednesday.