Real Madrid winger Takefusa Kubo has completed a loan move to Villarreal, the LaLiga champions have confirmed on Monday.

The 19-year-old will have the opportunity to play in the Europa League at Estadio de la Ceramica, after the Yellow Submarine secured a fifth-place finish in La Liga under Javier Calleja last term. 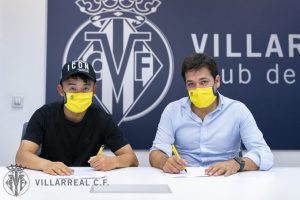 Calleja was ultimately relieved of his duties for failing to deliver Champions League qualification, with ex-Arsenal boss Unai Emery drafted in as his replacement on July 23.

Kubo will go straight into Emery’s squad with a view to getting more regular minutes under his belt and continuing his development following a bright start to his LaLiga career at Mallorca.

The Japan international was sent straight out on loan to Son Moix after joining Real Madrid from FC Tokyo last summer and went on to record four goals and four assists in 35 appearances for the club.

Back in April, Kubo expressed a desire to return to Santiago Bernabeu and fight for a place in Zinedine Zidane’s line up at the end of his stint at Mallorca. He told AS: “My preference is clear, to be able to play at the Bernabeu with a Real Madrid shirt on. It all depends on me and I will have a place at Real.”

“Right now, I’m at Mallorca to give it my best and to show that I can be there.”

The talented young attacker added on his relationship with the Madrid boss: “Zidane treated me very well. He is a coach who is alert to the details.”

Kubo will now have to wait at least one more year before being handed the chance to prove himself at the Bernabeu, but he will at least have the opportunity to continue playing in Spain’s top flight.

Despite his best efforts, Mallorca were relegated from La Liga in June, and although the club were reportedly keen on retaining the teenager’s services, Madrid refused to entertain any possibility of a loan extension.