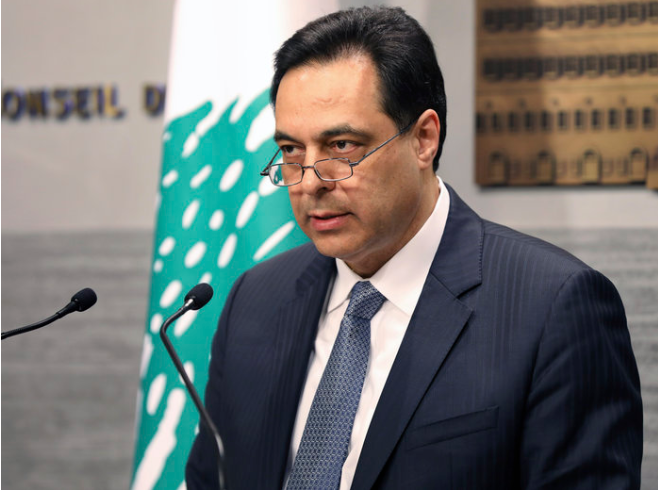 “Today I announce the resignation of this government,” Diab said. “May God protect Lebanon.”

Diab’s speech was published by the National News Agency in Lebanon, the state-run media outlet.

His resignation came after last Tuesday’s deadly warehouse explosion — caused by 2,750 tons of ammonium nitrate stored at Beirut’s port — that killed at least 160 people, wounded thousands and left many homeless, destroying a portion of the city.

Public anger mounted after the blast, focusing on the carelessness that led to one of the worst explosions in Lebanon’s history, npr.org reported.

The huge trove of dangerous material, which officials say was known about for years, had been allowed to languish in the port since 2013. Intense protests erupted, with many calling for top officials to “resign or hang,” according to NPR’s Ruth Sherlock.

“We are facing an earthquake that struck the country, with all its humanitarian, social, economic and national repercussions,” Diab said.

Diab, a 61-year-old professor and former minister of education, has only been in the role since January.

When he took over, Diab faced many of the same challenges that forced his predecessor, Saad Hariri, to resign.

Even before the recent disaster, Lebanon was seeing widespread and persistent protests over allegations of political corruption, and frustration with a deepening economic crisis.

Lebanon has a power-sharing government structure, where different groups are each represented by an arm of the government.

The political system mandates that the presidency must go to a Christian, the prime minister must be a Sunni Muslim and the speaker of parliament must be a Shiite Muslim.

This system has been blamed for the country’s past political instability and division.