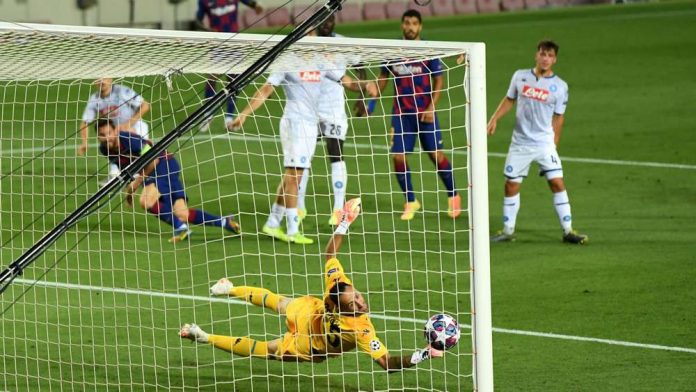 Lionel Messi was in fine form as Barcelona progressed to the Champions League quarter-finals, with a 3-1 second-leg defeat of Napoli sealing a 4-2 aggregate victory.

An action-packed first half at Camp Nou saw Barca take a three-goal lead, before Lorenzo Insigne pulled one back from the spot in stoppage time.

Clement Lenglet’s ninth-minute header broke the deadlock, with Messi netting an exquisite second prior to winning a penalty which Luis Suarez converted. 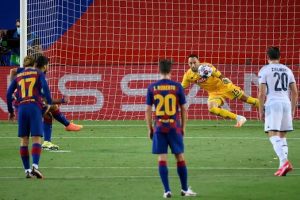 Insigne’s spot-kick gave Napoli hope, but Barca had enough to book their place in the last eight, where Bayern Munich await.

Further punishment followed when Messi bundled his way through a crowd of defenders and, despite an untimely slip, he curled a wonderful finish beyond David Ospina. 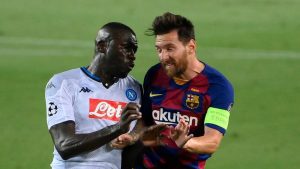 It appeared Barca had gone 3-0 up by the half-hour mark, only for Messi to have a second goal ruled out for handball, yet Barca had their third when Suarez scored from the spot after Kalidou Koulibaly clumsily kicked Messi.

Napoli were handed a lifeline two minutes later, however, with the referee harshly deeming Rakitic to have fouled Mertens – Insigne converting the resulting penalty.

Insigne could have doubled his tally early in the second half, but failed to test Marc-Andre ter Stegen with a close-range header.

Arkadiusz Milik looked to have made an instant impact after his introduction from the bench late on, only for his header to be disallowed for offside as Barca secured their place in Portugal with minimum fuss.

Barcelona set up a Champions League quarter-final against Bayern Munich. 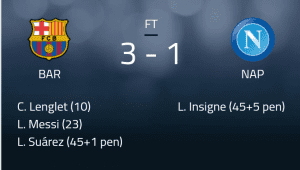