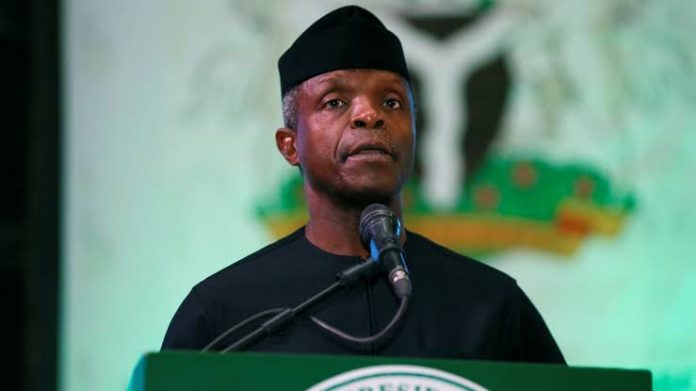 The Vice-president, Prof. Yemi Osinbajo, has said the President Muhammadu Buhari-led administration is committed to working with the private sector in building the economy and making it sustainable through constructive policy engagement.

He equally added that the current administration was committed to promoting agriculture, improving on public works and sustaining its ease of doing business mantra.

He disclosed these on Friday during a 2020 Presidential Policy Dialogue organised by the Lagos Chamber of Commerce and Industry via Webinar, in response to requests and suggestions made by participants.

The Webinar played host to a number of industrialists, entrepreneurs, and captains of industries in banking, tourism, and aviation sectors among others.

The Director-General of LCCI, Dr Muda Yusuf, said this initiative from the chamber was in furtherance of its public policy advocacy.

He said the chamber believes that through engagements such as this, the government and the organised private sector “can identify and address issues affecting the growth of our economy with a view to proffering long-lasting solutions to them.”

Osinbajo while reacting to a suggestion by one of the participants that the 774,000 jobs to be created through the National Directorate of Employment should be deployed to agriculture, said the government had no such arrangement, as it had already has a programme on agriculture.

He said, “We are was currently registering new farmers and linking with major farmers across the country.”

“Each farmer had his farmland and there was a mechanism where each one of them was being monitored on their farmlands.

“The 774,000 jobs across Nigeria are for public works. Both ways, we are employing those youths who are interested in agriculture and public works.

The Vice-president while equally responding to a request by a garment making entrepreneur, who had requested government’s assistance in allowing those in that sector to import machineries in order to boost the scale of production and create multiple employment for Nigerians, advised them to liase with Ministry of Industry, Trade and Investment with their request.

He said he agreed totally with the request and that the Federal Government would work out modalities to assist them, describing garment making industry as a low-hanging fruit, which would be explored.

He said, “The garment industry has to come forward like the creative industry and engage with the government. They should come up with a roadmap the government can work with.”

On the aviation sector, Osinbajo noted that it was a critical sector and a key driver of the economy, which would also receive government intervention through the Central Bank of Nigeria, in putting the airlines back on good footing after over five months of lockdown over coronavirus pandemic.

He said, “We would work out ways for them to access credit through the CBN.”

The Minister of Industry, Trade and Investment, Otunba Niyi Adebayo, said his ministry always work with stakeholders in arriving at policies to drive the economy positively.

He said, “Aside from policy formulation, another key area is ineffective implementation strategy and monitoring process, all of which increase the risk profile of the economy.

“In addressing this, the current administration has adopted a holistic process in policy formulation spanning agenda setting, adoption, and the eventual approval of such policy.

“This involves stakeholders’ engagements of various sectors, recent examples being the Oil and Gas Stakeholders Engagement Forum and the Automotive Industry Stakeholders session conducted earlier in the year among others.

“This is to ensure that input from industry players and other relevant stakeholders are incorporated to create an effective policy environment.”

The President of LCCI, Mrs Toki Mabogunje commended the Federal Government on its efforts to revamp the economy, and assured that the LCCI would continue to partner with government in driving and achieving its economic policies.