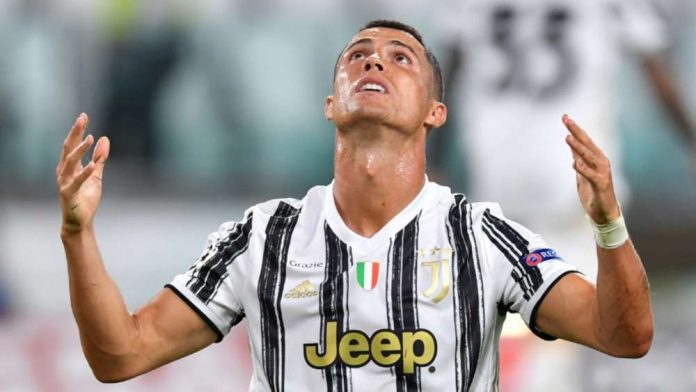 Lyon advanced to the Champions League quarter-finals in Lisbon after beating Juventus on away goals despite defeat in the second leg.

Cristiano Ronaldo’s brace could not rescue Juventus’ Champions League campaign on Friday as they crashed out to Lyon on away goals at the last-16 stage, despite a 2-1 win in Turin.

Having lost March’s first meeting 1-0 in France, Juventus could ill afford another setback but conceded after just 12 minutes as Memphis Depay’s spot-kick gave Ronaldo and his teammates, mountain to climb.

With the aid of their own generous penalty call, Ronaldo sought to lead the expedition and had the hosts in front on the night when he followed up his strike from 12 yards with a long-range effort in the second half. 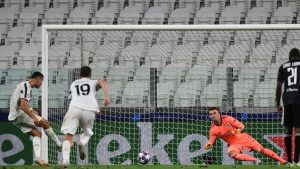 Although, Cristiano Ronaldo hit a hat-trick at this stage against Atletico Madrid last season, such a feat proved beyond him this time as Juventus paid for Lyon’s bright start.

Houssem Aouar saw a low volley touched around the post by Wojciech Szczesny and the first penalty soon followed after the same man appeared to be tripped by Federico Bernardeschi just before a lunging Rodrigo Bentancur swept the ball away. 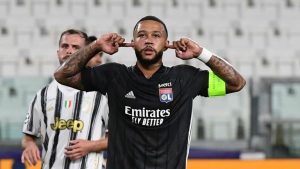 The spot-kick stood following a Video Assistant Referee review and Memphis Depay kept his cool to dink a finish down the centre of the goal, before Juventus finally kicked into gear.

A sublime last-ditch challenge from Marcelo denied Bernardeschi an open goal and Ronaldo then directed a stooping header over the crossbar.

Anthony Lopes’ strong right hand superbly kept out Ronaldo’s free-kick, but the next intervention came from the arm of Depay. Miralem Pjanic’s set-piece bounced away off the goalscorer’s elbow, prompting a second harsh spot-kick which Ronaldo tucked away. 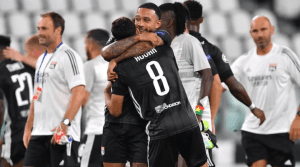 Just as Juventus were toiling approaching the hour mark, Ronaldo came to the fore once more and unleashed a blistering left-footed strike that Lopes could only help into the top-right corner.

Ronaldo centred for Gonzalo Higuain to head over, before the two-goal star was wasteful from a similar position after Juventus had called for Paulo Dybala from the bench.

Lyon offered precious little going the other way but clung to their narrow advantage as Dybala hobbled off, Maurizio Sarri’s risk in throwing on a half-fit forward failing to bear fruit. 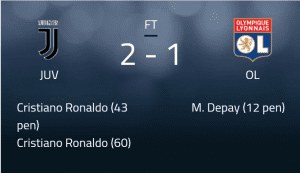