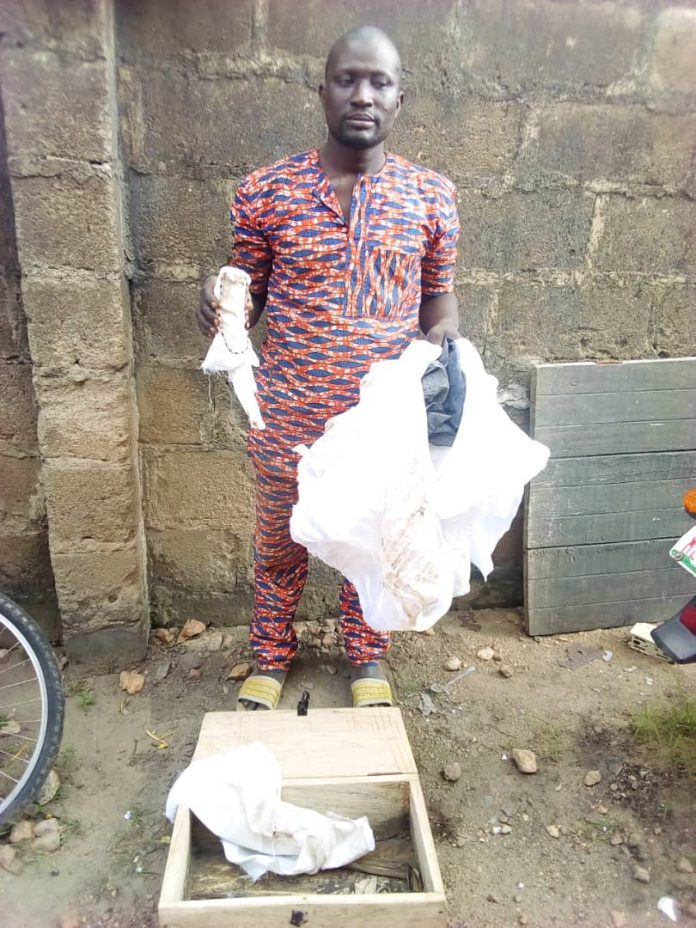 A 37-year-old national of Republic of Benin, Gbese Peter, has been arrested by men of Ogun State Police Command for defrauding a Nigerian couple, Mr & Mrs Bamigboye Alao of total sum of N5m.

The shock over the fraud was said to have led to the death of Mr Bamigboye.

The suspect was alleged to have defrauded the couple under the pretence of helping them to overcome their spiritual problem and shielding their children from untimely death.

He said Mrs Bamigboye had told the police she and her husband met the suspect about five years ago and he revealed that a serious spiritual calamity awaited them and their children if an urgent spiritual step was not taken.

Oyeyemi said out of fear, the couple agreed to embark on the said spiritual journey and he took them to the Republic of Benin where he gave them a wooden coffin which he instructed them not to open until he asked them to do so.

He said Mrs Bamigboye stated further that the suspect started collecting money from them, until they coughed out the total sum of N5m.

He said, “She said when they realised that they have been swindled, the shocked led to the death of her husband.”

Acting on the complaint, the Divisional Police Officer, Sabo Division, Abeokuta, Nicholas Tamunoinom, detailed detectives to go after the suspect.

Oyeyemi said the suspect was apprehended with the help of members of public on Saturday 25th of July 2020.

On interrogation, he said the suspect confessed collecting money under false pretence from the couple but he claimed that he only duped them of N3.5m and not N5m as claimed by the woman and that he used the money to build a house for himself.

Meanwhile, the Commissioner of Police, Edward Ajogun has ordered the immediate transfer of the suspect to the State Criminal Investigation and Intelligence Department for proper investigation and prosecution.