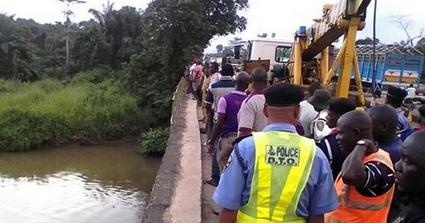 Four persons died while two others were injured on Tuesday when a commercial bus plunged into Ososa River on Sagamu-Ijebu Ode -Benin Expressway.

He said an eyewitness told the TRACE personnel who went to the scene that the number plate GGE 596 DV was coming from Ijebu Ode inbound Sagamu when the accident occurred about 10:20 am.

While he said the accident was due to speeding, Akinbiyi added that six persons, comprised five males and a female were involved in the accident that led to the death of the four, including the female.

The TRACE spokesman said the corpses of the victims had been deposited at the Ijebu Ode General Hospital Mortuary,  while the survivors were also receiving treatment at the hospital.

He advised motorists against speeding to avoid unnecessary loss of lives.