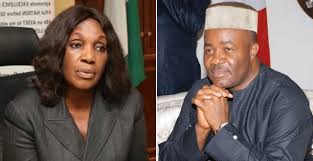 He said this on Monday among others while being cross-examined by the House of Representatives Committee investigating the alleged financial mismanagement in the NDDC.

While reacting to a question on the faceoff between him and Nuniel, Aklpabio decked in white Guinea brokade agbada added that the ex-managing director had no exemption letter.

He said, “The former Managing Director of the NDDC was relieved of her appointment when I received a letter from the then Chief of Staff (may his soul rest in peace) that she did not possess the requisite qualifications to be there.

“For instance, we have written twice to the National Youth Service Corps and twice they have insisted that she never served and that she does not have an NYSC certificate or an exception.”

Akpabio added that among other reasons, Nunieh was sacked due to insubordination.

Talking about other issues in the NDDC, he talked about contract splitting which he said had become a common practice in the commission.

This, he said, was to beat the threshold of N1bn contract mark, which required the approval of the Minister of Niger Delta Affairs.

He also told the committee that the forensic audit of the commission had started, stating that he only awarded only three contracts so far.

The lawmakers rattled Akpabio when he had alleged that most contracts awarded in the NDDC went to the National Assembly members, but he recanted that he never referred to Tunji-Ojo as being a beneficiary but to the state where he hailed from.

Earlier, Tunji-Ojo, announced that he was stepping aside from chairing the House of Representatives Committee on NDDC affairs, investigating the activities of the commission.

He said he had been unjustly accused of being on a “mission of vengeance’ by a member of the Interim Management Committee of the NDDC.

He, however, debunked this allegation, stressing that he was not on any revenge mission.

He later announced that he was stepping aside,thanking the members of the committee and later took his leave of the panel.

He said “I wish to humbly appeal to my colleagues to excuse me from this investigation. This for the betterment of the Niger Delta. There’s nothing personal.”

The deputy chairman, Thomas Ereyitomi later presided over the proceedings of the day.

A mild drama, however, occurred when the acting MD of the Niger Delta Development Commission, Kemebradikumo Pondei, momentarily slumped while answering questions from the panel members.

They were asking him questions on expenditure and extra budgetary spending under his tenure.

He could, however, not provide plausible answers and suddenly he became uncomfortable on his seat, and almost falling off.

Some officials of the commission rushed to his rescue.

He was later led out of the venue, and rushed to the hospital.

The committee adjourned for 30 minutes and later reconvened and the proceedings continued.