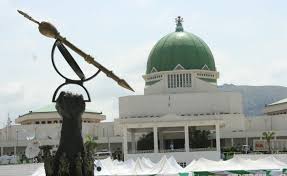 Some protesters were said to have stormed the precints of the  National Assembly in Abuja this morning.

But sources said they were dispersed by security operatives at the complex,
before journalists could fathom what was going on outside.
So it was not clear on whose prompting they were there.
“We learnt some protesters from the Niger Delta area were dispersed here this morning. Before we got to them they had been dispersed and we could not ask them on whose behalf they were here, “one of the journalists covering the National Assembly said from the clips monitored on television by our correspondent.
However, as of the time of filing this report, the House of Representatives Committee on the Niger Delta Development Commission, is waiting to receive the Minister of the Niger Delta Affairs, Senator Godswill Akpabio.
The acting MD of the NDDC has just arrived the venue of the probe panel.
The sitting of the panel kicks off at 11am.
Recall that the NDDC has been under structiny over alleged corruption and President Muhammadu Buhari had ordered a probe of the activities of the commission.
Share on:
WhatsApp