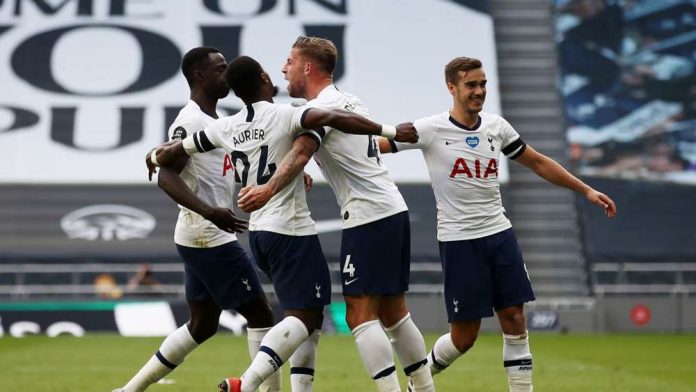 Tottenham moved above Arsenal in the Premier League table thanks to a 2-1 derby win secured in the latter stages.

Spurs were second best for much of the encounter and conceded first, but after equalising and then holding firm against a dominant Arsenal, Alderweireld glanced home late on to move Jose Mourinho’s men above the Gunners in the table.

While the game perhaps lacked some of the derby’s usual ferocity, the first half certainly provided thrills and spills, with Alexandre Lacazette’s spectacular opener and Son Heung-min’s well-taken leveller both consequences of defensive mishaps.

The contest was considerably different after the break, however, as Spurs sat back and appeared to invite pressure on. After seeing Pierre-Emerick Aubameyang hit the crossbar, the hosts clinched victory nine minutes from time, keeping them in the hunt for a European spot.
The match burst into life with Lacazette’s goal – the Frenchman blasting into the top-left corner after Granit Xhaka had won possession back from Serge Aurier.
However, Arsenal’s lead lasted just 137 seconds, defensive concentration proving their Achilles heel yet again as Sead Kolasinac’s mishit pass to David Luiz released Son, who provided a clever finish over the approaching Emiliano Martinez.
Arsenal’s goalkeeper did make a decisive intervention just past the half-hour mark, though, tipping Ben Davies’ piledriver onto the bar, before an Aubameyang free-kick went agonisingly wide at the other end.
Although the excitement initially dried up after half-time, a dominant Arsenal did go close to retaking the lead in the 59th minute, Aubameyang’s fierce left-footed strike crashing off the bar.
Following the reprieve, Spurs appeared emboldened towards the end. Martinez was forced to pounce at the feet of Son after good work from Harry Kane but was helpless to prevent Alderweireld clinching a potentially vital victory for Spurs, the Belgian meeting Son’s corner with a well-placed header. 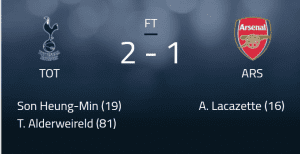