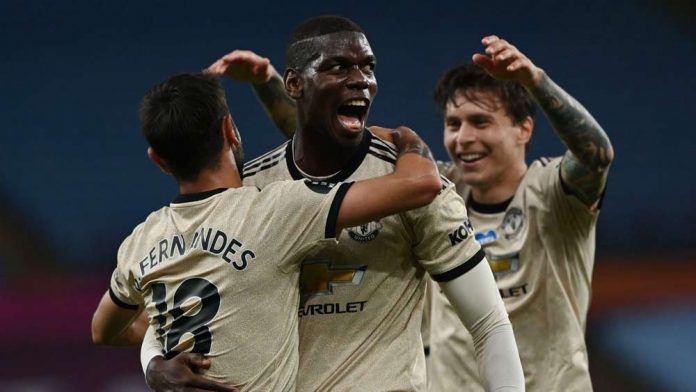 Manchester United became the first in the division’s history to win four successive matches by a margin of three goals or more as they extended their unbeaten run to 17 games in all competitions.

Bruno Fernandes set them on their way by converting a controversial penalty, before Mason Greenwood took his tally to four goals in three games prior to the break.

Pogba picked out the bottom corner of the net from a Fernandes corner in the 58th minute to leave United one point outside the top four.

Despite United’s recent purple patch, it was Villa who began brighter and Jack Grealish missed the target with a volley early on from a back-post Ezri Konza cross.

They came closer still when Trezeguet dispossessed Pogba and bent a low effort against the outside of the post.

A minute later, United had a penalty. Fernandes attempted a double drag-back to go beyond Konza, but his left leg came down into the defender, an act that referee Jon Moss deemed worthy of a spot-kick.

The contentious decision stood after a video-assistant referee review and it was Fernandes, rather than Marcus Rashford, who stepped up to slot home United’s record-equalling 13th Premier League penalty of the season.

Greenwood and Fernandes then both came close before the former continued his fine scoring streak by blasting home right-footed in first-half stoppage time. 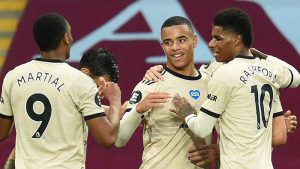 Aaron Wan-Bissaka really should have added the third early in the second half with a header that missed the target, and although he could not register his first goal of the season, Pogba soon did.

Fernandes picked out the Frenchman on the edge of the box from a corner and the World Cup winner steered his effort inside the post. 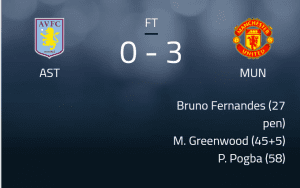