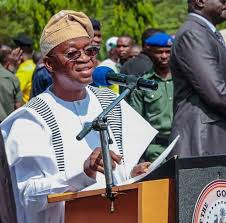 The governor of State of Osun, Adegboyega Oyetola, has ordered the total lockdown of four local government areas of the state for seven days to curtain the spread of the COVID-19.

The decision was reportedly a fallout of the meeting between the state government and the stakeholders from the LGAs.

The lockdown is expected to commence on Tuesday, July 7, and it will last for one week in the first instance.

These were contained in a statement issued by the state’s Commissioner for Information and Civic Orientation, Mrs Funke Egbemode.

The governor said the decision to impose a total lockdown on the four local government areas was aimed at containing the spread of the virus in that axis of the state.

He added that “if the compliance level is not encouraging, the government will announce further extension, as community transmission has been on the increase in the affected areas.”

The state also said it was closely monitoring other LGAs with rising numbers of those testing positive for COVID-19 and might in the days ahead lock down more areas.

However, the relaxation of the lockdown in other parts of the state has been extended by two weeks.

The statement read partly, “The lockdown will be total. Residents and citizens in that axis will not have opportunity to go to worship centres and markets during the period.

“They will only be allowed to shop within their neighbourhood.

“Under the lockdown, there will be no vehicular movement within the affected areas. Only those on essential duties such as health, fire service, environmental officials, security personnel, power and water supply agencies, media and telecommunication officers will be allowed to move.”

The governor urged the citizens and residents of the affected communities to take advantage of the hours between now and Monday to stock up provisions that would last them one week in the first instance.

“We have mandated and mobilised the state’s task force and security operatives to strictly enforce the measures,” he warned.