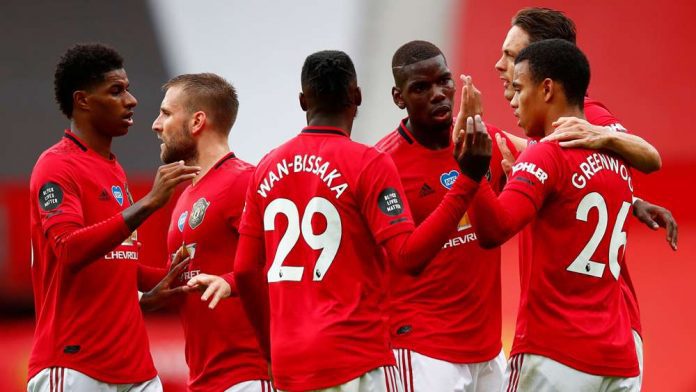 Manchester United went above Chelsea with a win that extended their unbeaten run to 16 games in all competitions.

They fell behind to Junior Stanislas opener, but led at the break through first-half efforts from Greenwood, Marcus Rashford and Anthony Martial.

Joshua King’s penalty reduced the deficit, yet Greenwood’s second stunning strike was added to by Bruno Fernandes’ free-kick as United marched on.

The Cherries took a shock 16th-minute lead when Stanislas followed up his initial blocked effort and nutmegged Harry Maguire on the byline before beating David de Gea at his near post.

But the Red Devils soon roared back when Greenwood blasted in a venomous left-footed drive having been found by Fernandes.

And six minutes later, United were ahead. Adam Smith needlessly handled the ball following Martial’s downward header and Rashford stuck the resulting penalty into the bottom-right corner of the net.

That put Rashford ahead of Martial in their personal goals duel, though the Frenchman also moved onto 20 for the campaign in emphatic fashion, cutting in off the left flank and rifling into the top corner with a brilliant right-footed strike.

Bournemouth were handed a route back into the match when United made a sloppy start to the second half.

De Gea had already saved from Lewis Cook and Arnaut Danjuma hit the post after Maguire gave the ball away before Eric Bailly handled trying to control Nemanja Matic’s pass.

King converted the penalty against his old club, only for Greenwood to again deliver an emphatic response six minutes later, this time with his right foot.

Fernandes, with two assists to his name already, then got in on the act as United scored five at Old Trafford in a Premier League game for the first time since 2011. 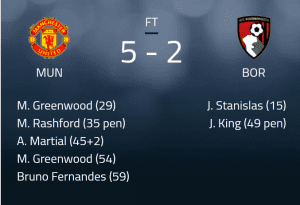