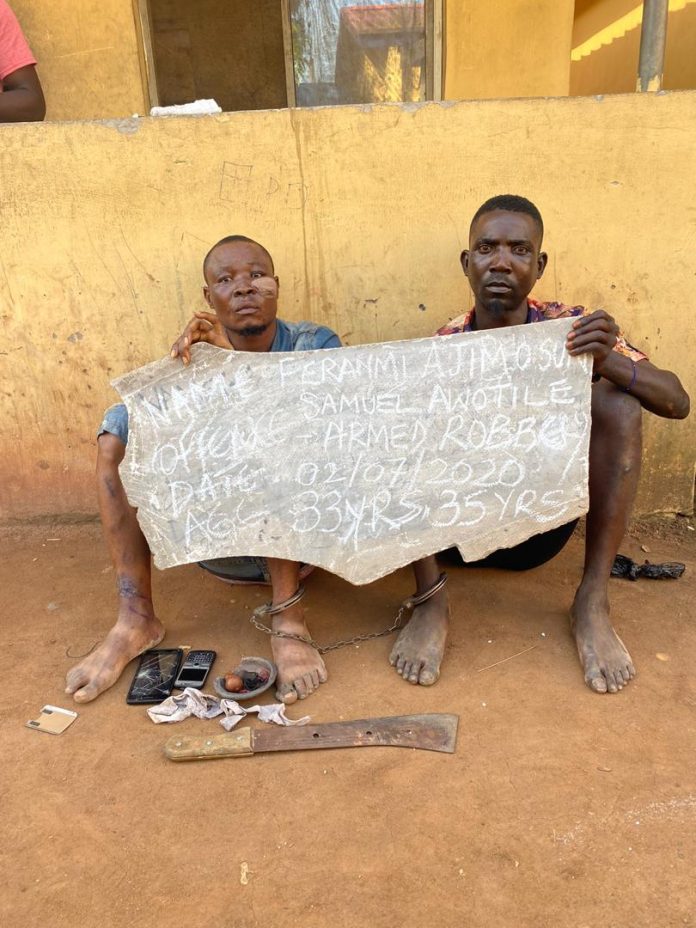 The command said the suspects, Feranmi Ajimosun (35years) and Samuel Awotile (33 years) were responsible for many cases of motorcycle theft within Mowe/Ofada axis.

The state Police Public Relations Officer, Abimbola Oyeyemi, added that the duo were arrested on Wednesday following a complaint by one Akinola Adenekan, who said they dispossessed him of his motorcycle while he conveyed them as passengers.

Oyeyemi said, “Adenekan said he conveyed the two suspects on his Bajaj motorcycle with number plate SGM 408 BN as passengers from Mowe going to Ofada.

“But while they still on Ofada road, one of them suddenly turned his neck violently from behind while the second one brought out a machete and wounded him on the forehead.”

He said while Adenekan was struggling with them, some passersby met them at the scene and the hoodlums took to their heels.

Upon the report, he added that the Divisional Police Officer, Mowe division, Marvis Jayeola, quickly detailed his detectives to unravel those behind the dastardly act.

“The detectives embarked on an intelligence based investigation which eventually led them to Ijere Worogudu Village where one of the suspects was apprehended.

“His arrest led to the arrest of the second suspect at Ogunrun phase II Abule Afa in Mowe,” he said.

During the interrogation, Oyeyemi said the suspects confessed being the brain behind cases of motorcycle theft in Mowe/Ofada and its environs.

Recovered from them were one cutlass, two phones, assorted charms and another Bajaj motorcycle which they confessed they snatched from another victim.

Meanwhile, the state Commissioner of Police, Kenneth Ebrimson has ordered the immediate transfer of the suspects to Special Anti-robbery Squad for further investigation.