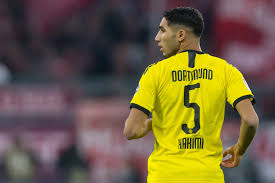 Real Madrid’s half-full back Achraf Hakimi has been signed by Inter Milan, the two clubs announced this on Thursday.

The 21-year-old signed a five-year contract with Antonio Conte’s side, which would expire in 2025, according to a report in Italy.

He has scored nine goals in 45 appearances in all competitions for Dortmund this season.

Hakimi joined Madrid’s junior team in 2006 but struggled to establish himself in the first team and has spent the last two seasons on loan at Borussia Dortmund.

A statement from Inter Milan read,”Achraf Hakimi is officially an Inter player.”

“The Moroccan, who was born in 1998, has joined the Nerazzurri on a permanent basis from Real Madrid and has signed a contract which will last until 30 June 2025.”

On the other hand, a statement from Madrid read in part, “Real Madrid and Inter Milan have agreed to transfer Achraf Hakimi.

“The club wants to thank Achraf for all these years of dedication, professionalism and exemplary behaviour since he came to our academy in 2006 and wishes him good luck in his new phase.”